Mercedes Benz, counted among the one of the leading luxury automobiles manufacturer and a multinational division of the German manufacturer Daimler AG has launched it’s new class of luxury cars in the Indian market. Mercedes Benz introduces the much hyped new E-class sedans in the country. 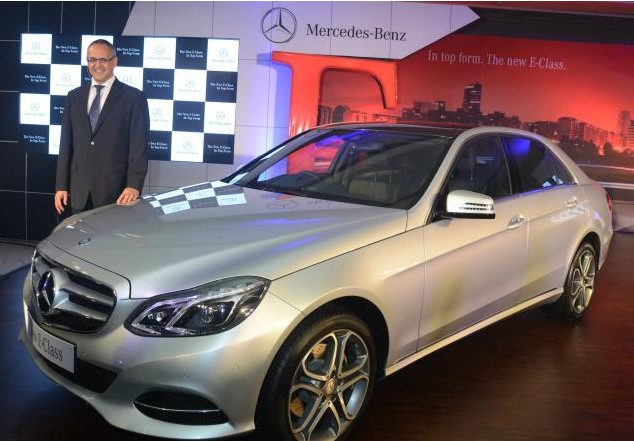 Coming towards the technical specification of the recently launched E-Class models, the E 250 CDI is powered V4 diesel engine which has a displacement of of 2143 cc. This performance oriented engine generates a peak power of 201 bhp with an alarming torque of 500 Nm. From such a huge output, the sedan smoothly achieve from 0-100 kmph within a span of just 7.5 seconds. Specifying the details of the second element in the same class, E 200 CGI is a petrol engine which has a displacement of 1991 cc a bit lower than E 250 CDI. It chunks out a power of 135 bhp with a highest torque of 300 Nm at 1200-4000 rpm. Backed by these figures, the model smoothly glides 100 kmph from initial in a mere 7.9 seconds.

The launch of the Mercedes-Benz E200 CGI model at a price of Rs 41.5 lakh and E250 CDI Rs 44.48 lakh should help the German car maker further improve its domestic sales and in doing so perhaps even provide the necessary boost for it to retain the No. 1 spot in India’s burgeoning luxury car space.

Expressing his views at the launch ceremony, Kern was quoted as saying, “The new E-Class with its blend of stunning new design idiom, pioneering Intelligence Assistance Systems, exemplary safety and comfort features, luxurious appointments and best in class modern range of infotainment systems, creates a whole new benchmark in the luxury full-size segment. With more than 2000 parts and components used, the new E-Class undoubtedly is the ‘Best E-Class ever’ and reiterates Mercedes-Benz’s prowess as the pioneers of technical innovations towards safety, design, performance and comfort. Its new emotive design reinforced with the Intelligence Assistance Systems, reaffirms the E-Class’ position as the most sought after luxury sedan in its segment. The new E-Class is a completely high-tech package–and a very attractively packaged one at that.”

From the sources, we also came to know that the new sedan comes with more than 2,000 parts and components, entailing new technologies internally and externally. The importance of the new version in the companies portfolio can be gauged by the fact that 23,000 units of the sedan have been sold since its launch in the country in 1995.

Let’s see that the E-class would be able to give the taste of same success which the company has witnessed in the year 1995. What you all guys think will E-class sedan drive other competitors run for their money in the same segment.